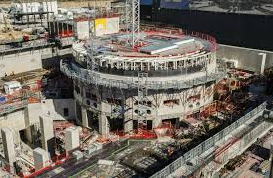 The ITER was formed in 24 October 2007 and Headquarters in Saint- l`es-Durance in Provence, southern France. Its director-general is Bernard Bigot. The Heating power of reactor is 50 MW and fusion power is 500 MW, whereas its discharge duration is up to 1000s. The construction was started in 2013 and will accepted to be completed in 2025. The total budget of this project is $14 billion by June 2015 and construction and operations is expected to be in excess of 20 billion euro. The US department of Energy has estimated the total constructions cost to 2015 be $ 65 billion.

The projects have overall 30 to 35 countries directly and indirectly but it is funded and run by seven countries in the world. These countries are – India, European Union, Russia, USA, China, Japan and South Korea. The ITER goal is to demonstrate the scientific and technologies feasibility of fusion energy for peaceful use.

AL Maktoum International Airport is an international airport in Jebel Ali, 37 kilometre southwest of Dubai, United Arab Emirates that opened on 27 June 2010.It is the main part of Dubai South, a planned residential, commercial and logistics complex. It is owned by Government of Dubai and operatored by Dubai Airports Company. It is Hub for Emirates ShyCargo and flydubai.
When fully completed (expected to be 2027), the airport will contain transport modes, logistic and value-added services, including manufacturing and assembly, in a single free economic zone. It will cover an area of 14000hectares 35000 acres. The airport has a projected annul capacity of 12 million tonnes of freight and between 160 million and 260 passengers. Its estimated cost is more than $32 billion.  As of May 2019, only a handful of airlines operate passenger services out of AI Maktoum International Airport.

Dubailand is an entertainment complex being built in Dubai, UAE, which owned by Tatweer ( Which belongs to Dubai Holding). Announced in 2003 it was one of the most ambitious leisure developments ever proposed anywhere in the world costing $64.3 billion. You can imagine it budget and size as it total budget is more than ITER and it size is as big as three Disney Walt can fit to it. This is the thing that only  UAE can do. It total size is 278sq. km. It is accepted to be completed in 2025 for public. It will also have world’s largest hotel ,with 6500 rooms, and a 10-million -sq.ft mall. This all thing is can’t imaginable.

In 2008, most of the developments in Dubailand were put on hold and virtually all of the staff and workforce were fired due to 2007 Financial crisis. But it was continued in 2010.

4. The Great Man- Made River

The Great man-Made River is a network of pipes that supplies freshwater obtained from the Nubian Sandstone Aquifer System fossil aquifer across Libya. It is the world largest irrigation project. The project utilizes a pipeline system that pumps water from the Nubian sandstone aquifer system from south in Libya to cities in the populous Libyan northern coast. The water travel up to 1600 kilo meter. and provides 70% of freshwater used in Libyan.

The total length of this river will 2820 km and aqueducts in the world. It consists of more than 1300 wells and most 500m deep, and supplies 6500000 cubic meter of fresh water per day. This is best unbelievable for such country. The projects have started in 1984 and the total cost will be around $25 billion.

Jubail is a 22-year long industrial city project that began its second phase in 2014 with an $11 billion expansion budget. Jubail 2 industrial construction is a multi-billion dollars industrial city aiming to create social benefits. When it will comprise at least 100 industrial plants, an 800000 cubic meter desalination plant, miles of railways, roads, and highways, and an oil refinery producing at least 350000 barrels per day. The entire project is slated to be finished in 2024.

Jubail 2 is creating one of the world’s greatest industrial city on Jubail is not an easy task. Jubail industrial City, which was built more than three decades ago will double its size once completed during 2016. A cost of $80 billion for only infrastructure works only. No matters it is the largest projects for UAE and the world.

Crossrail is a 73-miles new railway line under development in the United Kingdom. Crossing London from west to east at each end of its central core the line will divide into two branches . In 2015 ,a section of one of the eastern branches, between Livepool Stret and Shenfield, was transferred to TfL Rail; this precursor service also took control of Heathrow Connect in May 2018 and the Paddington to reading line in December 2019. It will have total 41 stations. it is accepted to be completed in 2024/25. and Its total accept budget is 1 billion Euros.per year. Th total size of this is 13miles or 21 Km, and the operational speed will 140 Km. It is the UK’s longest under tunnel track.

Beijing Daxing International Airport is located on the border of Beijing and Langfang, Hebei Province, is Beijing’s second international airport. The name of the airport was announced on September 14, 2018. It has nicknamed “Starfish”. The terminal building in one the largest single-structure airport terminals in the world, with an area of more than 700000sq. m. It was completed on 2019 and the open ceremony was held on September, 2019. The air port was opened for public now. This airport is hub for Beijing Capital Airlines and China United Airlines.

The airport was constructed in almost five years of construction, the total cost of construction is $11 billion  facility features a 700000sq. m terminal and sites 47 sq. km of land, making it one of the largest single building airport terminal.

California High-Speed Rail is a publicly funded high speed rail system under construction in the in the US state of California. It is projected to connect the Anaheim Regional Transportation Inter modal Center in Anaheim and Union Station in Downtown Los Angeles with the Salesforce Transit Center in San Francisco via the Central Valley. By this high speed rail network you can travel Union Station and San Francisco in just 2 hrs and 40 minutes an distance 610 Km.  It have total 24 stations. It was approved in 2008 with $9 billion bond and start construction  and accepted to complete in 2033.

The main thing that with Los Angeles to San Francisco services will start in 2033 and the budget will increase to $98.1 billion. So that is the power of public funded project.

South-North Water Transfer Project is a multi decade infrastructure mega projects in China. Ultimately it aims to channel 44.8 billion cubic meter of fresh water annually from the Yangtze River in southern China to the more arid and industrialized north through three canal systems. It is because the north of China is home to almost 50 percent of China’s population but has only about 20 percent of the country’s resources. To remedy this imbalance, China has funded the construction of three huge canals, each more than 600 miles long and will carry water to north from China’s largest rivers. In 2014 $79 billion had been spent and accepted to be more. This project is also expensive than ITER.