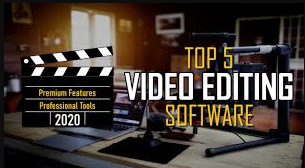 Top 5 best video editing software for high-level editing in the world.|The best video editing software never seemed more important, as the world connects virtually more so than ever right now. It is now becoming important especially in this era, as have seen the importance for many people who are new creator, or movie editor or whether you’re creating a short clip for social media. A movie or a video not only depend upon the acting and performance as it also need a high level editing. So, for this you have a better knowledge of editing software and there functions and uses. As there many software for different usages.
Now, in this blog we are going to take a look of top 5 best video editing software that are best for everyone beginner and advanced. Any one case access and learn without any tutor, if he know very little functions. Generally these software are perineum and you have to pay money to purchase it. There are also crack version available on many website, but you can’t access its features and updates. So, I basically not recommend that.
So, lets begin.

Adobe Premier pro is recommended the best video editing software in the world. It is a time line  based video editing software applications developed by Adobe System and published as part of the Adobe Creative Cloud licensing program. First launched in 2003, Adobe Premier Pro is a successor of Adobe  Premier(first launched in 1991). It is greed towards professional video, editing while its sibling, Adobe  Premier Elements, targets the consumer market. It is developed for both Windows and Mac.
CNN was an early adopter of Adobe Premium. Also, in 2007, certain BBC departments adopted  Premier. It has been used to edit features films, such as Deadpool, Gone Girl, Captain Abu Read, and more recently Terminator Dark Fate and Monsters, and other venues such as Madonna’s Confessions Tour. So, if talk about its performance and difficult as it is too easy and understandable for beginners. So I defiantly recommend it ,if you are a beginner or advanced.
Price = Rs.16,500.

Final Cut Pro X is a professional non-linear video editing application is published  by Apple Inc.  as part of their ProApps family of software programs. It was released on June 21, 2011 for sale in the Mac App Store. It is the successor to Final Cut Pro. It is written in Cocoa and only available for mac OS. It is also a Commercial proprietary software.
Final Cut Pro X was made available for purchase and download on the Mac App Store on June 21, 2011, along 2011 with new version of motions and compressor. Since then the application has been updated a few times each year with new features, bug fixes, native codec support, and overall Improvements with stability. You will notice that many features found in Final Cut Pro 7 that were missing in final Cut Pro X on its initial release have subsequently been added such as: XML import and export, server support, multi cam editing, chapter markers, and broadcast monitor support.
Overall it is a high level top class video editing software, best for mac user. It is also some complex so you will get some problem in the starting.
Price = $299.99

Nero Video is a video editing software from Nero AG that provides simple editing functions as well as advanced video, which includes multi track timeline and key framing functions . Nero video also provides a wide range of functions for including photos and music in video projects, as well as a broad selections of transition, video, audio and tittle effects. In additions, it includes templates for semiautomatic film creation and for picture-in-effects. Once editing is complete, user can export their finished film as a file or upload it to web. They can also use Nero video to burn the film onto DVD’s and Blu-rays and personalize the disc creation is a separate module and can be executed directly from the module and can be execute directly from the start screen.
It was initially launched in 12 April, 2010. It only support on Windows Operating System                (10/7/8/8.1/).  Some of its special features is like  adding striking 4K templates and effects, as well as perfect transitions to your video to your video, Play videos with embedded subtitles and drag and drop extra ones to the playback functions. Use the new Gracenote ingeration to add and play back original albums. And with the improved Nero Media Home Wi-Fi Sync App, you can easily transfer photos and videos wirelessly from your iOS and Android smartphone to your PC and vice versa.
Price =  Rs.19,999

Adobe Premier Elements is a video editing software applications published by Adobe Systems. It is called a scaled-down version of Adobe Premier Pro and is tailored to novice editors and consumers. The entry screen offers clip organisation, editing and auto-movie generation options. Premier Pro projects files are not compatible with Premier Elements projects files.
It was first introduced in 2004 and stable released in 2018. the best thing is that it will support on both Operating System i.e. MacOS and Windows OS. It is very best and understandable for every beginner as it support many languages. Almost 10 language in Windows and 4 language.
While market separately, it is frequently, it is frequently bundled for added value with Adobe Photoshop Elements. In 2006, it was identified as the number one selling consumer video editing software. Its main competitors are Final Cut Express, AVS Video Editor, Power Director, Pinnacle Studio, Sony Vegas. It is such a best for beginners.
Price = $99.99

Corel Video Studio is a video editing software package for MS Windows. The software allows both storyboard and timeline-oriented editing. Different formats are supported for source clips, and the resulting video can be exported to DVD, AVCHD, HD-DVD and AVI. Video Studio also supported direct DV and HDV capturing to disk.Users also overplay a Flash animation, an image, or text on the video. However, the of overlay allowed is limited. The user must remove a particular color from the overlay video so that the required background or picture can appear in the foreground.
It will only support Microsoft Windows. Video Studio can change apparent video playback speed, reverse it, and modify hue saturation. It provides tools that let the user trim, crop, split video tracks. The soundtrack can be split from the video. A feature that Corel calls “SmartRender” renders only the edited portions of video, so a user can preview edited footage without Video Studio creating temporary files. This features also makes final rendering much faster.
Price = Rs.4,714
So,these are the list of best 5 video editing, hope definitely liked by you.
Comment and share who need it.