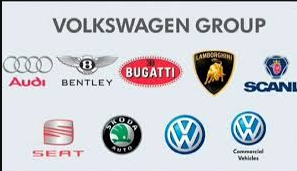 Top 6 company owned by  Volkswagen Group| Boom.| Volkswagen is a German multinational company headquartered in Wolfsburg, Lower Saxony, Germany. Volkswagen design, manufactures and distributed passenger and commercial vehicles, motorcycles, engine and turbo machinery and offer related services including financing, lessing and fleet management.  This company was world’s largest automaker by sales, overtaking Toyota and keeping this title in 2017, 2018 and 2019 selling 10.9 million vehicles. It has also maintained the largest share in Europe for over two decades. But the important thing to notice on thing company that it is not too advanced or popular but it have owned such companies that make world class cars and most expensive cars. But this company is also the best in the world as it have got seventh position in 2108 Fortune Global 500 list of the world’s largest companies.
So now we will talk about the top such companies that is owned by Volkswagen.
Let’s begin.

Lamborghini is an Italian brand and manufacturer of luxury sports cars and SUVs based in Sant`Agata bolognese. The company is owned by the Volkswagen Group through its subsidiary Audi. It was sold to Volkswagen Group by Mycom Setdco and Indonesian group in 1998. There it was kept under the control of the groups Audi division.
Lamborghini  was founded on 1963 by Ferruccio Lamborghini. Its parent company is Audi, but Audi is owned by Volkswagen, so Lamborghini is also owned by Volkswagen Group. The company is total 1,146 employees and it total revenue is 586 million Euros (2014), and total equity 1.832 billion (2014). Lamborghini currently produces the V12- powered Aventador and the V10-powered Hurricane, along with the Urus SUV powered by a twin turbo V8 engines for offshore powerboat racing. Lamborghini Trattori, founded in 1948 by Ferruccio Lamborghini, is headquartered in Pieve-di Cento, Italy and continuous to produce tractors. This company is generally known for its super cars speed and beautiful design. Today Lamborghini

Bugatti is the world top class automobiles manufacturer or high-performance automobiles, founded in 1909 in the German city of Molsheim, Alsace by the Italian-born industrial designer Ettore Bugatti. The cars were known for their design beauuty and their many race victories.
In 1987, an Italian entrepreneur bought the brand and revived it as a builder of limited production exclusive sports cars based in Modena. In 1998, the Volkswagen Group bought the rights to the Bugatti marque and set up a subsidiary based back in Molsheim, Alsace.
The company is now the world best car manufacturing cars as it have both worlds fastest car i.e. Bugatti Chiron  and world expensive cars as i.e. Bugatti La Voiture  . No matter it was the best deal for the Volkswagen to buy it.

Porsche is a German automobiles  manufacturer specializing in high-performance sports cars, SUVs and sedans. The headquarters of Porsche AG is in Stuttgart, and the company is owned by Volkswagen AG, a controlling stake of which is owned by Porsche automobil Holsing SE. Porsche current lineup includes the 718 Boxster/Cayman, 911, Panamera, Cayenne and Taycan.
It was founded on 1931in Stuttgart, Germany Ferdlinand Porsche. Its total revenue is 21.533 billion euro by 2015. Its parents company is Volkswagen AG. The company has always had a close relatinship with, initially the Volkswagen marqu, and later, the Volkswagen Group ( which also own Audi), because the first Volkswagen Beetle waas designed by Ferdinand Porsche.

Audi is a German automobile manufactured that designs, luxury vehicles. Audi is  a member of the Ingolstadt, Bavaria, Germany. Audi-branded vehicles are produced in nine production facilities worldwide. The modern era of Audi essentially began in the 1960s when Auto Union was acquired by Volkswagen from Daimler-Benz.
It was founded by Zwickau, Germany on 15 April 1910; (110 year ago) and the Modern -era was founded on Neckarsulm, Germany(1 January 1969). Its foundered was August Horch. The Audi make the world class cars, luxury cars and sports cars. It is known by everyone in this world. The company have massive employees of 91,674 and the total equity of 29.689 billion euro. After relaunching the Audi brand in 1965 introduction of the Audi F103 series, Volkswagen merged Auto Union with NUS Motoren Werke in 1969, thus creating the present day from of the company. The company have a bright future.

Bentley  Motors Limited is a British manufacturer and marketer of luxury cars and SUVs- and a subsidiary of the Volkswagen Group since 1998. It was first acquired by Rolls Royce limited (1931) and then it was acquired by Vivkers plc (1980) and finally it is acquired by Volkswagen Group (1998). It was founded by in 1919 by H.M. Bentley and W.O. Bentley. Its headquarter is in Crewe, England, UK.
Bentley basically make luxury and Royal cars. Prominent models extend from the historic sports-racing Bentley 4 1/2 liters and Bentley speed six; more recent Bentley R Type Continental, bentley Turbo R, and Bentley Arnage; to  its current model line, include the Flying Spur, Continental GT, Bentayga and the Mulsanne-which are marketed worldwide, with China as its largest market as of november 2012. It is going to be the world best luxury and royals cars as it look like.

Ducati Motors is the motorcycle manufacturing division of Italian company Ducati, headquartered in Bologna, Italy. The company is owned by German automotive manufacture Audi through its Italian subsidiary Lamborghini, with Audi itself owned by Volkswagen Group. So, therefore it is owned by Volkswagen Group.
Basically Ducati make sports bikes and it comes under the fastest bikes in the world. It was founded by Antonio Cavalieri Ducati , Adriano Cavalieri Ducati and Burno Cavalieri Ducati. Its parent company is Lamborghini. Ducati bikes are sold in more than 60 countries. The most important thing of this supurb company is that it have won 15 World Super bikes Championship out of last 18 Riders, this shows the power of Ducati bikes. This is not enough as the Ducati have won more championship and a history in bike racing.
These are the top 6 Subsidiary of Volkswagen. Thanks for watching the full list, please comment your opinion in this blog and share if needed.