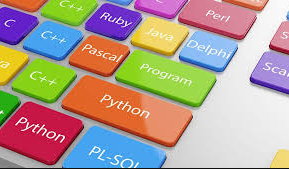 Python is a common programming language and the good thing is that it is the most simplest language in the world. So, if you are a beginner, that’s why this is at the top of our list.
Python is an interpreted, high level, general-purpose programming language . And again I am saying it is the first best language in the world. Created by Guido van Rossumand first released in 1991, Python’s design philosophy emphasizes code readability with its notable use of significant white space. Its language constructs and object-oriented approach aim to help programmers write clear, logical code for small and large scale projects
Python is a dynamically typed and grabages-collected. It support multiple programming paradigms, including structure (particularly, procedural), object-oriented, and functional programming. Python is often described as a ” batteries included ” language due to its comprehensive standers library.
Uses
Python is  a general purpose and high level programming language. You can use python for developing desktop GUI application, websites and web applications. Also, as a high level programming language, allow you to focus on the core functionality of the application by taking care of common programming tasks.

Java is a general purpose programming language that is classed-based, object-oriented, and designed to have as few implementation dependencies as possible.It is designed by Oracle Corporation and first appeared in May, 23, 1995.  It is intended to let application developers write once, run anywhere , it means that compiled Java code can run on all platforms that support Java without the need for recompilation. Actually Java is also simple and most useful language. There is almost everywhere use of Java.
java was once of the most popular programming language in use according to GitHub, particularly for client-server web applications, with a reported 9 million developers. And now it have more than 3 billion user.
Uses
Java can be used to create complete application that may run on a single computer or be disturbed among server and client in a network. It can also be used to build a small application module or applet ( a simply designed , small application ) for use as part of a web page. You can also go to android development through it. So Java is most useful language.

C++ is a general-purpose programming language created by Bjarne Stroustrup as an extension of the C programming language, of “C with Classes”. The language has expanded significantly over time, and modern C++ now has object oriented, generic, and functional features in addition to facilities for low level memory manipulation. It is almost always implemented as a compiled language and many vendors provide C++ compiler including the free software foundation LLVM Microsoft Intel Oracle and IBM so it is available on many platforms. It is first appeared in 1985; 35 years ago.
This programming language is the most useful language as many language are made by it (Java also). So, if you learn this language you can designed any thing, but the main thing is that it is some much difficult. The language is very useful and you can do many thing  with it; including desktop application, video games, servers (e.g. e-commerce, Web search, or SQL server). So Google, Apple, MS or Amazon all are made by C++. So you can think the power of C++. So it is the important language in the world.

JavaScript is also a programming language that conforms to the ECMAScript is high-level, often just in time compiled, and multi-paradigm. It has curly brackets syntax, dynamic typing, prototype-based object-orientation, and first-class functions. It was first appeared in December 4, 1995 and designed by Brendan Eich initially, plus other key contributors to the ECMAScript specification.
Alongside HTML and CSS, JavaScript is one of the core technologies of the World Wide Web. JavaScript enables part of web applications. The vast majority of websites use it for clients-side page behavior, and all major web browser have engine to execute it.
JavaScript is used to make dynamic view on website that is not done by the use of HTML and CSS. So you can say that JavaScript is more advanced than HTML.
JavaScript is generally used at many places like Web development and web design, Art and Games, Android Development and many more.
Although there are similarities between JavaScript and Java, including language name, syntax, and respective slandered libraries, the two languages are distinct and differ greatly in design.

C# is a also a general purpose, multi-paradigm programming language encompassing strong typing, lecically scoped, imperative, declarative, functional, generic, object-oriented and component-oriented programming disciplines. It was developed around 2000 by Microsoft as part of it. C# is one of the programming languages designed for the Common Language Infrastructure (CLI).
It was designed by Microsoft in 2000. Its Paradigm is Structured, imperative, object-oriented, event-driven, task-driven, functional, generic, reflective, concurrent. C# designer was Anders Hejisberg, and its development team is currently led by Mads Torgersen. The most recent version is 8.0, which was released in 2019 alongside Visual Studio 2019 version 16.3. The language is influenced by Chapel, Clojure, Crystal, D, J#, Dart, F#, Hack, Java, Kotin, Nemer;e, Oxygene, Ring, Rust, Swift, Vala, TypeScript.
This languages widely used at Microsoft for Web application, desktop Web application and such many more. It is used for game designed at Unity.
These are the top language that can used to everywhere. You can do anything with these language. So,, if you can’t to learn these language you can designed game, language , web development, android development. So, these are the best language of everyone. There are total almost 9000 language in that total 50 are used today.
So, if you want to learn more language or want to be more advanced then you can go through the next list. Actually these language are designed to make a certain thing, but you can use it to many things.
Note that you have to learn the basic language for that otherwise it will become more difficult.So, these language are –