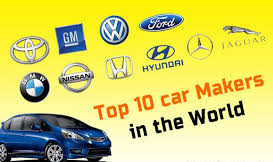 Top 10 automobile manufacture in the world.| Boom | The global auto industry is highly competitive, and it is dominated by companies in Europe, Japan, the United States, and South Korea. The maximum companies have not got too sales this year compare to last year. The automotive industry requires massive economies of dales to afford the research and development needed to roll out new models and stay competitive. After record sales in recent years, manufacturers are now scrambling to absorb slumping sales and manage the transition to electric and auto vehicles.
So, now we are going to list the top 10 automobiles companies in the world. The data is based on internet research. This some of the data is based on 2019, as 2020 data has not reveled as of pandemic.
So, let’s begin.

Volkswagen is a German multinational company headquartered in Wolfsburg, Lower Saxony, Germany. Volkswagen design, manufactures and distributed passenger and commercial vehicles, motorcycles, engine and turbo machinery and offer related services including financing, lessing and fleet management. The Company manufacturer almost  11 millions vehicles as of 2019. The net income of this company is 13 billion euro.
This company was world’s largest automaker by sales, overtaking Toyota and keeping this title in 2017, 2018 and 2019 selling 10.9 million vehicles. It has also maintained the largest share in Europe for over two decades. But the important thing to notice on thing company that it is not too advanced or popular but it have owned such companies that make world class cars and most expensive cars. But this company is also the best in the world as it have got seventh position in 2108 Fortune Global 500 list of the world’s largest companies.

Toyota Motor  is a Japanese multinational automotive manufacture headquarter in Toyota, Aichi, Japan. The company production output is 10.7 million in 2019 and 10.3 million in 2020. Toyota is the largest automobile manufacture in the Japan and second in the world, But the Toyota was the first company to cross 10 million in the world as he crossed in 2018. The company net income is 2,142,329 million Japanese Yen as of 2020.
Toyota was founded on Aug. 28, 1937 by Kiichiro Toyada. Toyata have many division as Toyota, Lexus, Ranz, Scion, TRD, Gazoo Racing, Daihatsu. The company has many subsidiaries more than 50. Toyota is the global market leader in sales of hybrid electric vehicles, and one of the largest companies to encourage the mass-market adoption of hybrid vehicles across the globe.  Toyota Motor corporation produce vehicles under five brands, including the Toyata brand, Hino, Lexus, Ranz and Daihatus. It also hold a 20.01% stake in Subaru Corporation, a 5.9% stake in Isuzu until 22018, a 5.5% stake in Mazda, a 4.9% stake in Suzuki, as well as joint-ventures with two Chinese companies i.e. GAC Toyota and Sichuan.

General Motors is an american multinational corporation headquartered in Detroit that designs, manufactures, markets, and distributes vehicles and vehicles parts, and sells financial services with global headquarters in Detroit’s Renaissance center. The production output of general motors is 7.7 million as of 2019. The company net income is $6.732 billion as of 2019. The 2020 report has not reveled .
The General Motors was founded on September 16, 1908 by William C.Durant and Charles Stewart Mott. The company division  is Buick, Cadillac, Chevrolet, GMC. General Motors manufactures vehicles in many countries; Its core automobile brands include Chevrolet, Buick, GMC, and Cadillac. It also either owns or holds a significant stake in foreign brands such as Holden, Wuling, Baojun, and Jiefang. Annual worldwide sales volume reached a milestone of 10 million vehicles in 2016.

Ford Motors is also an American multinational automaker that has its main headquarters in Dearborn, Michigan, a suburb of Detroit. It was founded by Henry Ford and incorporated on June 16, 1903. The total production output of Ford motors is 5.5 million as of 2019. The company sells automobiles and commercial vehicles under the Ford brand, and most luxury cars under the Lincoln brand.
Ford also owns Brazilian SUV manufacturer troller, an 8% stake in Aston Martin of United Kingdom and a 32% stake in Jiangling Motors It also has joint-ventures in China i.e. Changan Ford, Taiwan i.e. Ford Lio Hp, Thailand i.e. Auto Alliance Thailand, Turkey i.e. Ford Otosan and Russia i.e Ford Sollers.  The company net income is $47 million as of 2019. For dis the second largest US based automaker (behind General Motors) and the fifth largest in the world based on 2015. Its division are Ford, Lincoln and Motor craft. Ford was ranked eleventh overall American based company in the 2018 fortune 500 list, based on global revenues in 2017 of $156.7 billion.

Honda motor company is a Japanese public multinational conglomerate corporation primarily known as a manufacturer of automobiles, motorcycle and power equipment. The company have manufacturer 5.17 million cars as of 2019. Its headquarter is in Minato, Tokyo, Japan. The company manufacturer commercial vehicles, Auto mobiles, luxury vehicles, motorcycles and many more.
The Honda Motors was founded on October, 1946 by Soichiro Honda and Tak`eo Fujisawa. the net income of Honda Motors is 1.5 trillion Japanese Yen. Honda have been the world largest motorcycle manufacturer since 1959, reaching production of 400 million by  the end of 2019, as well as the world’s largest manufacturer of internal combustion engines measured by volume, producing more than 14 million  internal combustion each year. Also in 2013, Honda become the first Japanese automaker to be a net exporter from the United States, exporting 108,705 Honda and Acura models, while importing only 88,357.

Groupe Renault is a French Multinational automobile manufacturer established in 1899. The company produces a range of cars and vans, and in the past has manufactured truck, tractors, tanks, buses/coaches, aircraft and aircraft engines and auto rail vehicles. The company manufacturer 4.12 million cars as of 2018 the data of 2019 is not available. The company net income is 0.02 billion euro as of 2019 and the revenue is 55.54 euro.
The company was founded in 1899 by Louis Renault, Marcel Renault and Fernard Renualt .The company owns French state, Nissan, Daimler Pension trust and public float. The company have also many subsiadries  like Samsung Renult, Motorz and many more. In, 2016 Renult was the ninth biggest automaker in the world by production volume. By 2017, the Renult-Nisssan-Mitsubishi Alliance had become the world’s biggest seller of lights vehicles, bumping  Volkswagen AG off the top spot. Together Renult and Nissan invested 4 billion euro in electric vehicles. Since the launch of the Renult electric program, the group has more than 273000 electric vehicles worldwide through December 2019.

SAIC Motor Corp. Ltd is a Chinese multinational automotive company headquartered in Shanghai, China. The company is in Fortune Global 100. The company had the largest production volume of any Chinese automaker in 2014 making more than 4.5 million vehicles. Its manufacturing mix is not wholly consumer offerings, however, with as many as one million SAIC passenger vehicles being commercial vans. The latest data is not reveled, So its prediction is based on leaks and probability.
The Company is founded on 1955 but it was named as SAIC in 2011. The company revenue is $101.7 billion. The division is Maxus, Roewe, MG Motor, Manjing Automobile, MG Motor India and MG Motor UK. SAIC traces its origins to the early years of the Chinese automobiles industry in the 1940s, and SAIC was one of the few carmakers in Mao’s, China. Currently, it is participates in the oldest surviving sino-foreign car making joint venture, with Volkswagen and in addition has had a joint venture with General Motors since 1998.

It was founded in 1967 by Chung Ju-yung. The company manufacture Automobiles, luxury cars, Commercial vehicles and engine. The division are Genesis and Kia motors. Hyundai operates the world’s largest integrated automobile manufacturing facility in Ulsan, South Korea which has an annual production capacity of 1.6 million units. The company employs about 75000 people worldwide. Hyundai vehicles are sold in 193 countries through some 5000 dealership and showrooms.

Bayerische Motoren Werke (BMW) is a German multinational company which produces luxury vehicles and motorcycles. The company was founded in 1916 as a manufacturer of aircraft engines, which it produced from 1917 until 1918 and again 1933 to 1945. Its total production output is 2.5 million as of 2019. The company net income 5 billion euro and revenue of 104.2 billion euro.
The company was founded on 7 march, 1916 by Camillo Castiglioni, Franz Josef Popp and Karl Rapp. The company is well known in every part of the world. BMW manufacture BMW, Mini, Rolls-Royce, BMW motorcycle, BMW M, BMW I, BMW Motorrad. Automobiles are marketed under the brands BMW, Mini and Rolls-Royce, and motorcycle are marketed under the brand BMW Motorrad. BMW was the world’s twelfth-largest producer of motors vehicles, with 2.27 million vehicles produced per year the company has significant Motorsport history, especially in touring , Formula 1, sport cars and the Isle of Man TT. BMW produced motor vehicles in Germany, Brazil, China, India, South Africa, the United Kingdom, the USA. and Mexico.

Damiler Benz is a German multinational automotive corporation headquartered in Stuttgart, Baden-W`urttemberg. It is one of the world leading car and truck manufacturers. Daimler’s leading car and truck manufacturers. Daimler-Benz was formed wroth the merger of Benz & Cie and Daimler Motoren Gesellachft in 1926. The company production output is 3.34 million as of 2019. The company 2.709 billion euro.
The founded in 2007 and formally known as Daimler Benz that was founded on 1883. The Daimler have form the world class luxury cars company i.e. Mercedes-Benz. Daimler owned or had share in a number of car, bus, truck and motorcycle brands including Mercedes-AMG, Smart automobiles, Detroit Diesel  and many more.
Daimler have sold 3.3 million vehicles. By unit sales, Daimler is the thirteenth-largest car manufacturer and is the largest truck manufacturer in the world.
Daimler AG complex is Stuttgart-Benz and Daimler car plants, Mercedes-Benz and Daimler car plants, Mercedes-Benz Museum and stadium Mercedes-Benz Arena.
These are the world top 10 automobiles manufacturer company.
If you like comment your experience and share if needed.