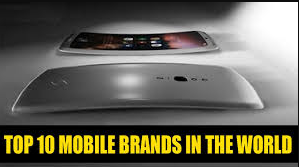 Top 10 best smartphone manufacturer company in the world 2020| Boom.| Smartphones have revolutionized our day to day lives. Consumer preference is dynamically evolving as new technologies.are spouting everyday, bringing the latest styles, innovations and features in the spectrum. Top mobile brands are including in extensive research and development in high-resolution cameras, design, processors, style look, and accessories, paying attentions to the consumer’s needs. Now there are many leading smartphones in the world. These company are the world best smartphones.
So, now in this blog we are going to list the world top best smartphone manufacturer in the world. These are based in latest data and internet research.
Let’s begin.

Apple has a large customer base as it offers products that have superior design and features, which have become more of an aspiration brand for people world wide. Apple has a global footprint in around 22 countries with 499 retail stores as of December 2017. The company have shipped almost 215 millions units. The company have released first phone in 2007 and it is the world best flagship manufacturer company.
Apple is an American multinational technology company headquartered in Cupertino, California, that design, develops and sells consumer electronic, computer software and online services. IT is considered one of the biggest tech company alongside Amazon , Microsoft , Samsung, Google and Facebook. It is founded on April, 1976 by Steve Jobs, Steve Wozniak, Ronald Wayne. Its revenue is $260 billion. The company hardware product include the iphones, iPad, iMac, iPod and  the Apple smartwatch. The Apple have become first publicly traded US company to be value at over $ 1 trillion. The company have maintained 137000 full time employees and 510 retail store in 25 countries as of 2020. This is also one of the best company in the world.

Huawei has cross one of the best innovations centers across the globe, and in 2016 Huawei invested 14% of its revenue in R&D. Huawei operates in more than 270 countries and is also expected to develop its own operating system. which shows its strong potential in the mobile market. The company have shipped 152 millions units.
Huawei is a Chinese multinational company headquartered in Shenzhen, Guangdong. The company revenue is $122.9 billion. The company also manufacturer Mobile, multimedia, networks consultancy. Huawei has deployed its products and services in more than 170 countries. It overtook Ericsson in 2012 as the largest telecommunications equipment manufacturer in the world, and overtook Apple in 2018 as the second-largest manufacturer of smartphones in the world, behind Samsung. In December 2019, Huawei reported that its annual revenue had risen to $121 billion dollars. Althrough successful internationally, Huawei has faced many difficulties and claims due to cyber security and people Liberation Army. The company is now banned in many country. Hope, it all will resolve soon.

Oppo is a Chinese consumer electronic mobile company headquartered in Dongguan, Guangdong. It is also a subsidiary of BBK Electronic Corp. along with OnePlus, Vivo and realme. Its major product lines includes smartphones, audio, devices Blu-ray players, and other electronic products.  The company have shipped 111 million units. Oppo has launched a wide range of smartphones ranging from the low segment to flagship segment. However Oppo smart marketing campaigns and branding, along with high product quality have made Oppo one of the top mopbile brands in 2020.
Oppo has founded on 2001 by Tony Chen. The Oppo manufacturer Hi-Fi, home theatre, audiovisual, smartphones. Its parent company is BBk Electronic. The brand name Oppo was registered in China in 2001 and launched in 1004. Since then they have expanded to all parts of the world.  In 2017, Oppo won the bid to sponsor the Indian national cricket team which allows their logo to be used on the team’s kits from 2017 to 2022.

Xiaomi is the 5th largest and best smartphone manufacturing in the world.  Xiaomi flagships bands are Redmi and MI series, and as the company have stated a new series in the lineup i.e. Poco specially in India.  Xiaomi have shipped total 95 million units this year.
Xiaomi is a chinese electronic company founded in April 2010 and headquartered in Bejing. Xiamoi makes and invests in smartphones, mobile apps, laptops, bags, shoes and fitness bands. The company have many other products beside electronic. Xiaomi is also the fourth company after Apple, Samsung and Huawei to have self-developed mobile phone chip capabilities.
Xiaomi was founded on 6 April 2010 by Lei Jun. The company headquartered in Haidian District, Beijing , China. The company revenue is  CN205.8 billion. Xiamoi released its first smartphone in 2011 and rapidly graowing gained market share in China. Xiaomi later develop a wider range of consumer electronic, including a smart home device ecosystem, which has connected more than 100 million smart devices. Xiamoi have change the market by manufacturer greart features in budget phones.

Vivo entered the mobile phone market within quarter of 2017 with a global market share of 10.7% Celebrity endorsements, brilliant advertising, and sponsorship have the brand to complete with Samsung, Apple and Oppo. The Vivo have shiped 95 million units this year.
Vivo was founded in 2009 by Shen Wei. It is also a subsidiarity of  BBK electronic. It is a chinese subsidiarity that dseign and manufacturer smartphones, smartphone accessories, software and online services. Its headquarter is also in Dongguan, Guangdong, China.
Since Vivo was founded in 2009, vivo has expanded to over 100 countries around the world. International expansion began in 2014. When international expansion began to 2014. In 2015, vivo became the title sponsor of the Indian Primer league. under a two-year deal starting in 2016 season. It have also sponsor the Pro Kabadi League and FIFA world cups. Vivo have also won the sponsorship deal with the NBA in china, with Golden state warriors player Stephen Curry Endorsing the brand in china and Philippines.

LG has been a known brand name in refrigerators and air conditions. But LG’s smartphones range has woo-ed over the consumer with their brilliant Android features. LG’s perimum smartphones models includes the K-series, G-series, LG Tribute, Flex and Nexus. The company have shipped 55 million smartphones this year.
LG is a south korean multinational electronic company headquartered in Yeouido dong, Seoul, South Korea. It was founded on 1958 by Koo In-hwoi. The company over revenue is $ 54 billion in 2018.LG electronic is part of the fourth-largest charbol in South Korea and in 2014 global sales reached $55 billion. It comprise four business units: Home Entertainment. mobile commutations, Home Applications, etc. LG Electronic owns Zenith and controls 37.9 percent of LG Displays. Since 2008, LG second-largest LCD television manufacturer. The company has operations worldwide, employing 83,000 people. This is also a awesome company that looks with a bright future.

Over the year, Lenovo has made  a global presence in 160 countries and has grown to become one of the top global mobile companies. Some of the popular smartphones by leveno  are P, K and A series. The company have manufacturer over 50 million units this year.
Lenovo is a Hong Kong based multinational technology company headquartered in Quarry Bay, and with operational headquartered in Morriscille, North Carolina and Beijing. The company design, develops, and manufacturers and sells personal computer, tablet, Smartphones and laptop. The company was founded on 1 November 1984 by Liu Chuanzhi. The revenue of this company is $51 billion. The company is owned by Legend Holdings. Today Lenovo have  operations in over 60 countries. Lenovo acquired the American mobile company i.e. Motorola Mobility from Google. In 2017, Lenovo acquired Fujitsu’s personal computer business.

ZTE Corporation is a chinese technology in 1985, ZTE listed on both Hong Kong and Shenzhen Stock Exchanges. ZTE is famous for its samrtphones, affordable mobile phones, Tablets. etc. along with various network and telecommunication equipment. The smartphone made by ZTE are also sold under the brand name ‘OEM’ in multiple countries across. the global. With intelligent marketing an extension distributing chain, and advertissing ZTE has maximum apporoximatly 140 countries.
ZTE was founded in 1985 by Hou Weigui. In June 2020, the ferdal communications comission designed ZTE a national security threat, threat, thereby barrinh it from US subsidies. In 1993, Zhongxing Semiconductor changes its name to Zhongxing New Telecommunications Equipment Co., Ltd with captial of RMB 3 million, and created a new business models as a state -owned and private operating economic entity.

Nokia Corporation is a finnish multinationl telecommunications,information technology, and consumer electronic company, founded in 1865. Noki’s headquarters are in Espoo, Finland, in the greater Helsinki metropolitan area. In 2018, Nokia employed approx 10300 people. This shows how big is the company. The company manufacturer almost 30 -35 millions units with its subsidiary Alcatel Lucent. The company provide services around 100 countries, did business in more than 130 countries, and reported annual revenue around 23 billion euros.
The Nokia was founded on May, 1867 by Ferdrik Idestam, Leo Mechelin and Eduard Polon. It is the oldest surviving company. The company has operated in various industries over 150 years. It was founded as a pulp mill and had long been associated with rudder and cables, but since the 1990s has focused on large-scale. The comapny was the largest worldwide vendor of smartphones in the world, but after the partnership with Microsoft and subsequent market struggles, its mobile phone business was bought by Microsoft, creating Microsoft Mobile successor in 2014.
Thank you to watch the full list.
Please comment your experience and share if needed.